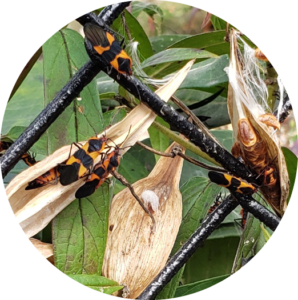 AKA the Milkweed Bug

Officially they’re known as the large milkweed bug but Halloween bug might be more appropriate. Not only does their black-and-orange coloring scream Halloween, we know trick or treat is near when they show up.

They may look scary but they’re more treat than trick. Large milkweed bugs (there is a small species as well) are generally considered beneficial because they help control the milkweed plant, which can be invasive. Milkweed is an important food source and breeding location for monarch butterflies, so large milkweed bugs let gardeners enjoy monarchs without worrying that milkweed may overtake their gardens.

Like the monarch, the milkweed bug protects itself by consuming milkweed sap, which is toxic to most predators. Their black-and-orange coloration is the same defense mechanism used by monarchs called aposematism, which warns predators of their toxic/bitter taste. They aren’t around after Halloween because they migrate south in the fall. They overwinter in the southern Atlantic and Gulf Coast states where they feed and breed and gradually migrate north again in the spring and summer.