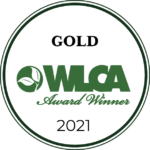 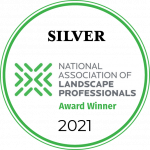 Nothing Simple About It

The client purchased the property with a grand vision of transforming and developing different areas in stages. The main residence will eventually be razed and rebuilt, so the area along Lake Michigan at the toe of an 80-foot bluff was developed first because it would be completely inaccessible after new-home construction.

The boat house was designed by a renowned architect; the client wanted a secluded outdoor entertaining and casual retreat area that complemented the building’s detailed architecture and the wooded lakeside site. They requested a formal appearance adjacent to the building but an informal one further away. Desired elements included: stoops and landings, a fire feature, a pergola, natural stone paving, lighting, a bocce court, an access path, and clean and simple landscaping.

This was an epic logistical challenge from day one. The elevation change from the top of the bluff to the site was about 80 feet with a grade close to 40 percent–not to mention the slope was vegetated with trees and understory plant material. Concrete was pumped several hundred feet downslope to pour footings and pedestals. For the prodigious pergola, 1,100 square feet with massive rough sawn cedar beams (8”x14”x28’) and 4×8” and 2”x4” joists and purlins, a zip-line was constructed to get the long lumber down the steep slope.

Time was not on our side either. Framing for the building was not finished until mid-autumn. With winter coming we had to fast-track areas as soon as they became available. We ended up completing the heaviest part of the project during the heart of winter.

The construction and landscaping work presented their own set of challenges. The paving is both patterned and irregular full-range bluestone. The Eden-Valders Stone for the masonry matches the building. The bocce court has Ipe framing, a drainage system, a crushed oyster shell surface, and lit marker lines for nighttime. We also added a Smart dimmable lighting system controlled via cellphone.

As for the landscaping, we met the goal of simple and clean using a monochromatic color scheme of different foliage textures, all which had to be deer resistant. We also used a large amount of ground cover around the building to eliminate additional topdressing of mulch. Both the beauty and logistical feat behind it exceeded the client’s expectations. 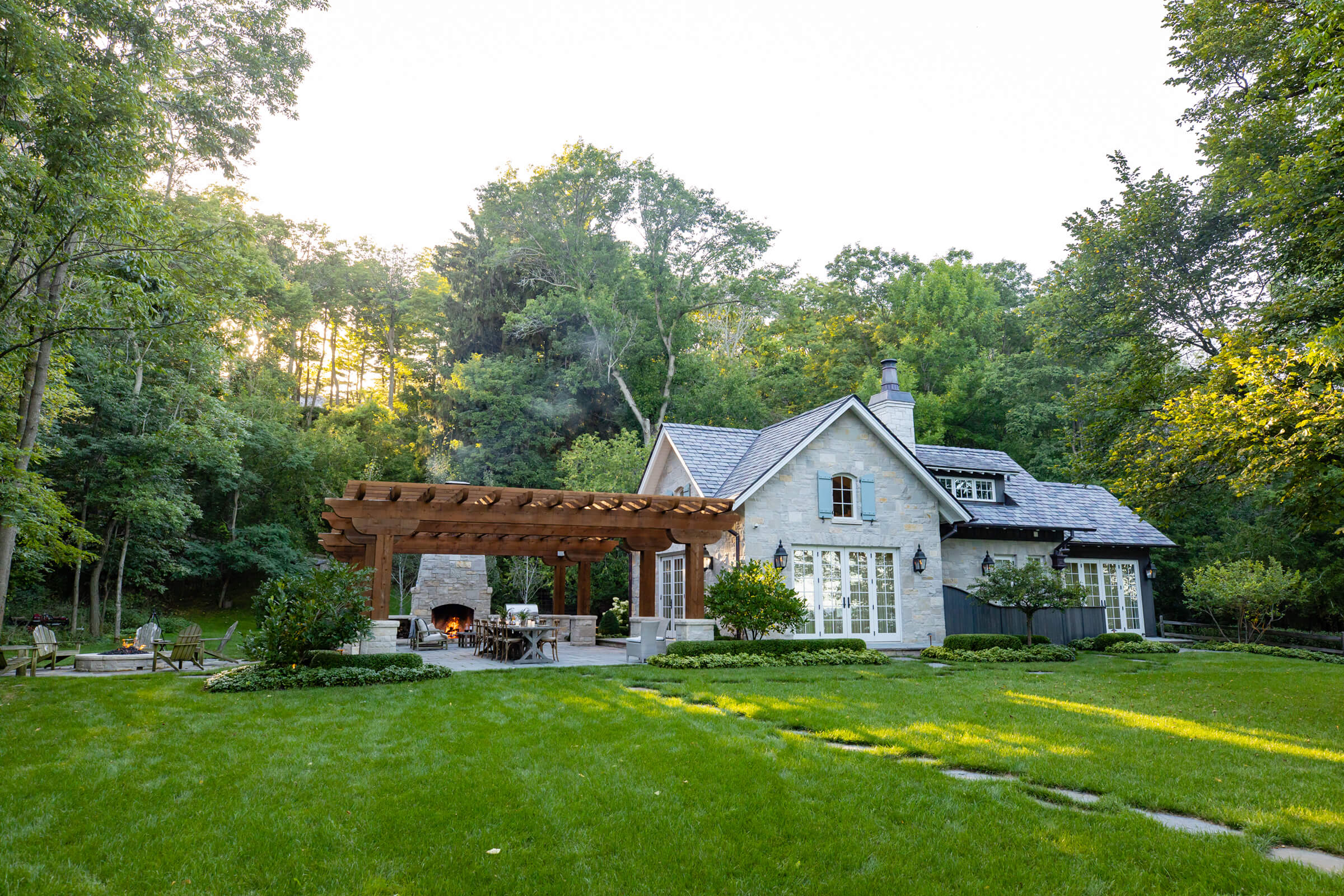 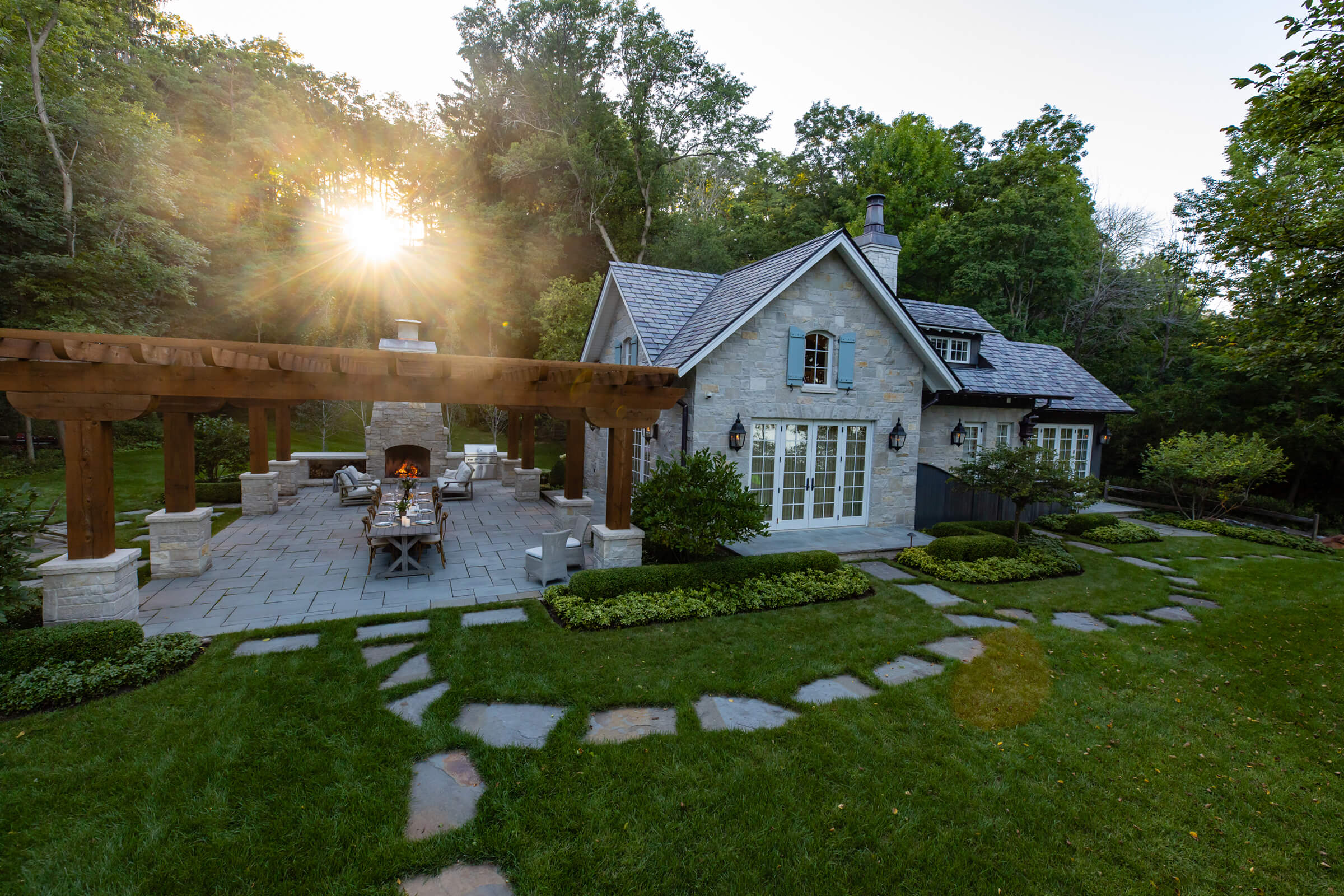 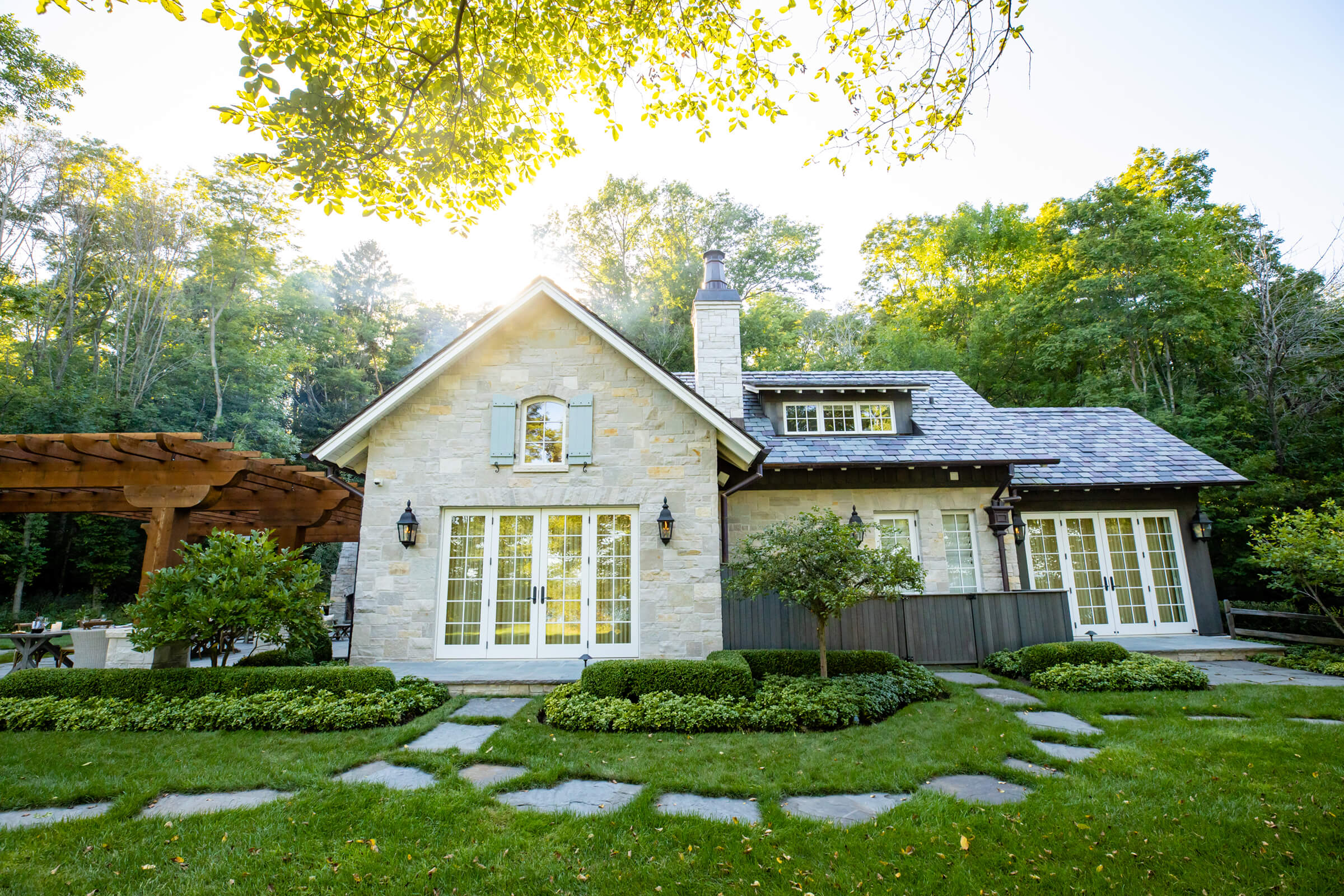 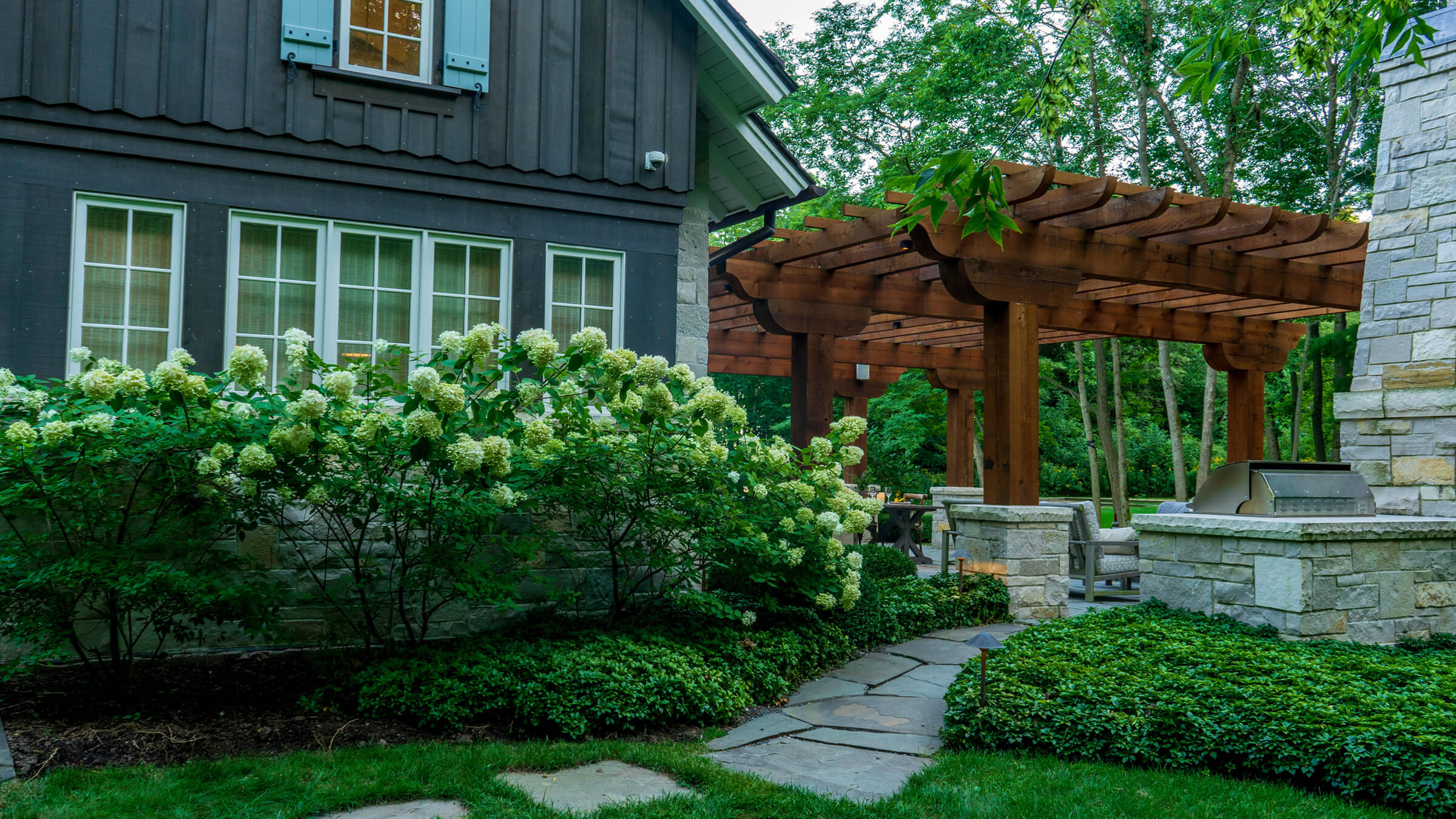 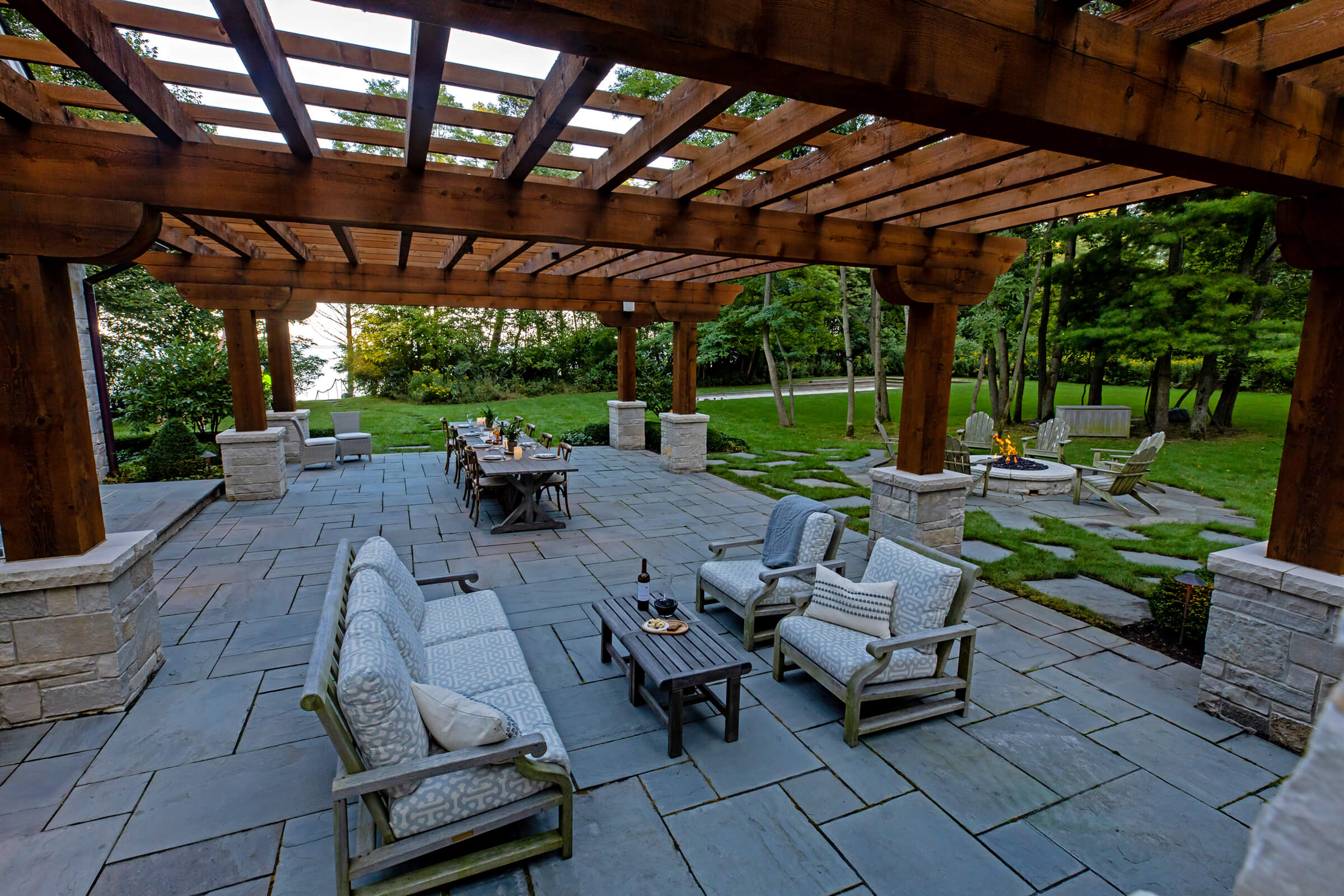 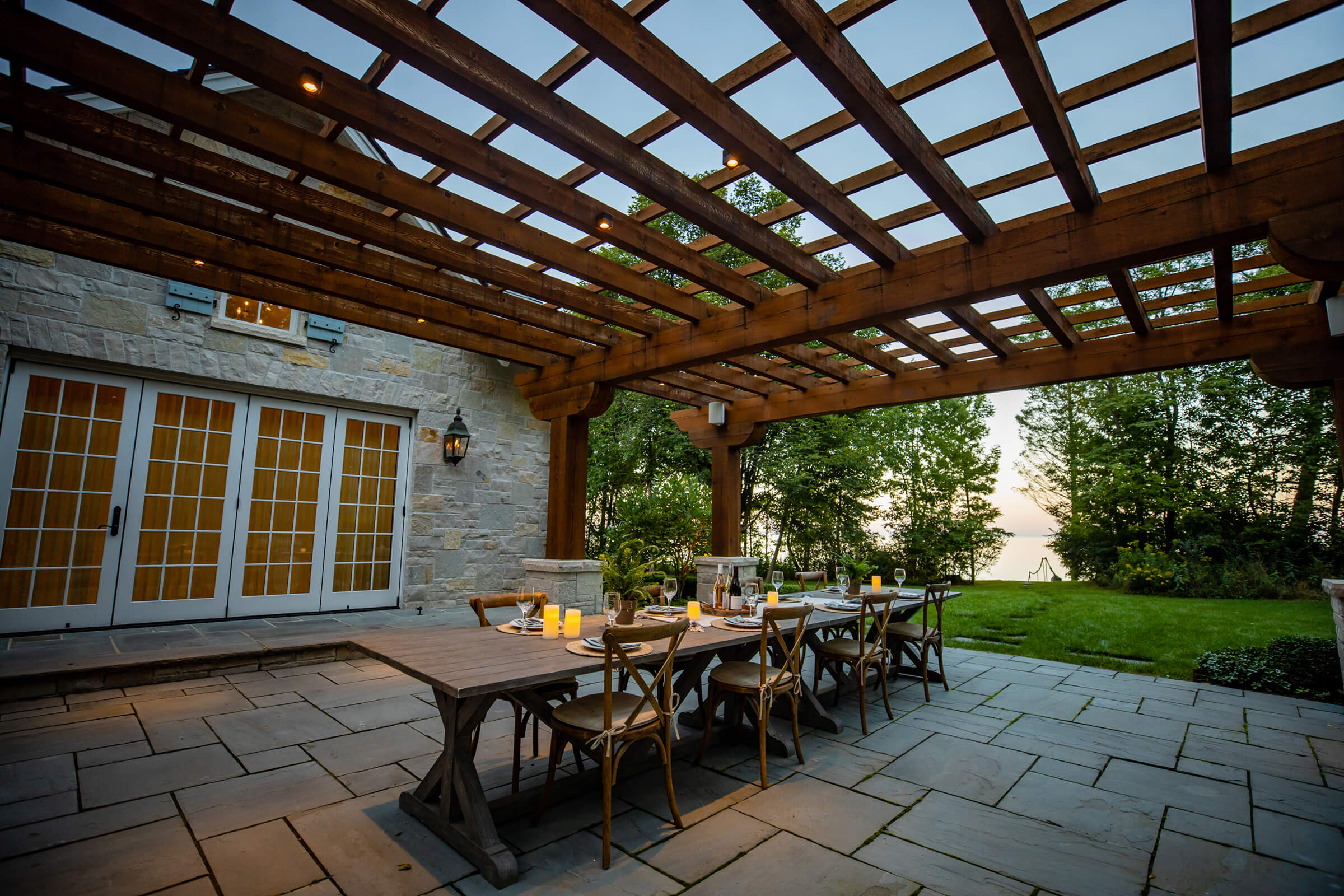 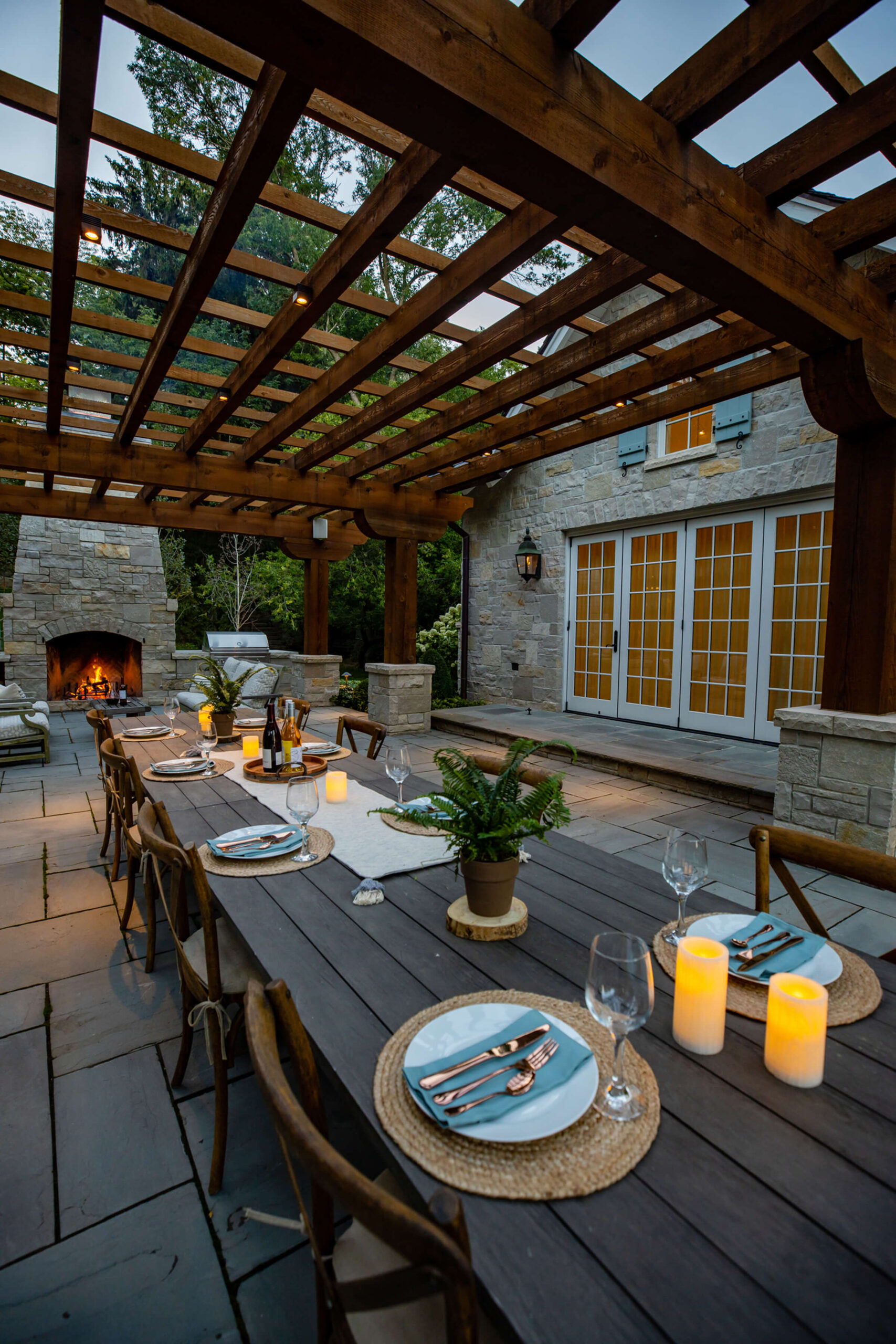 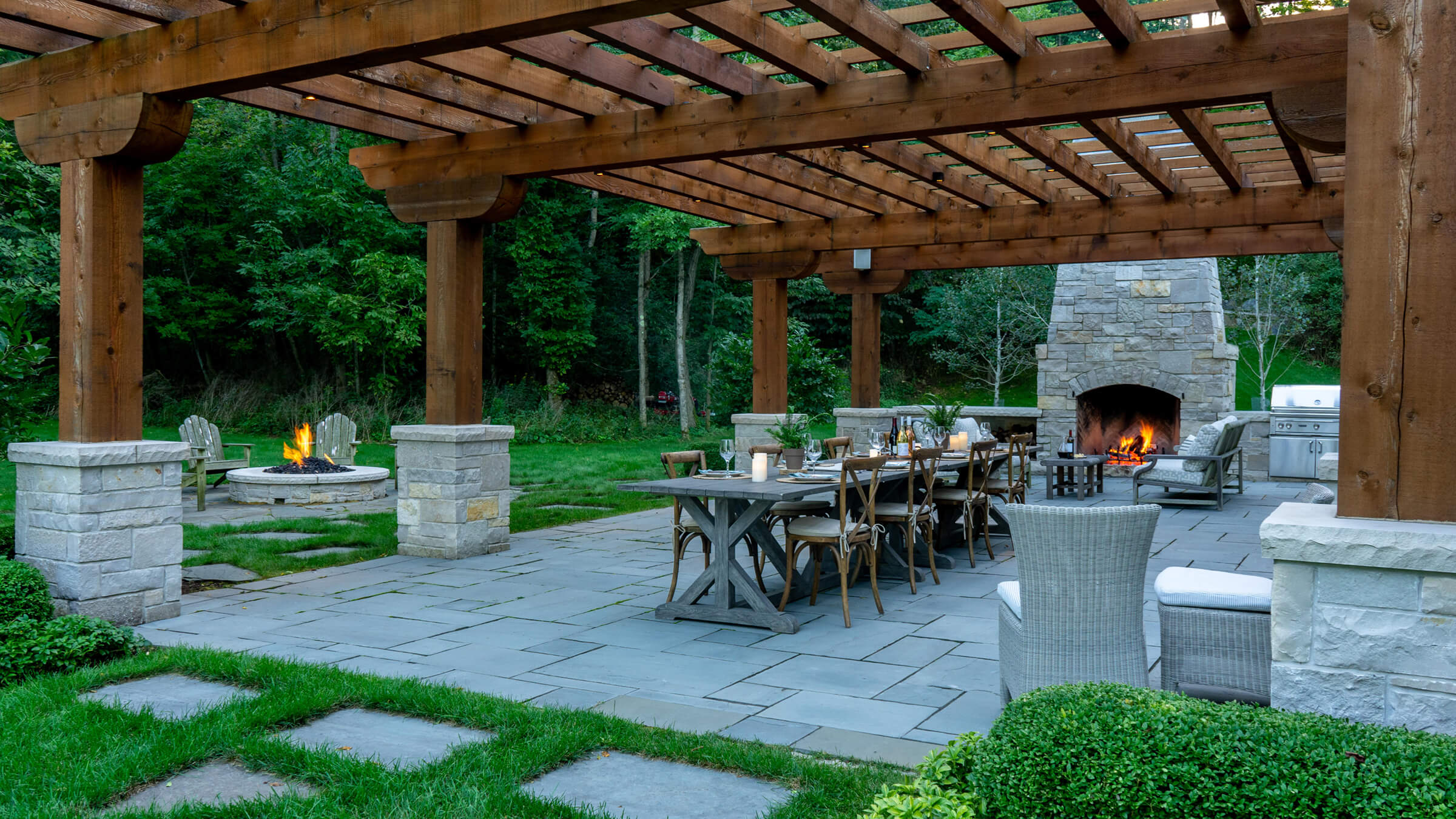 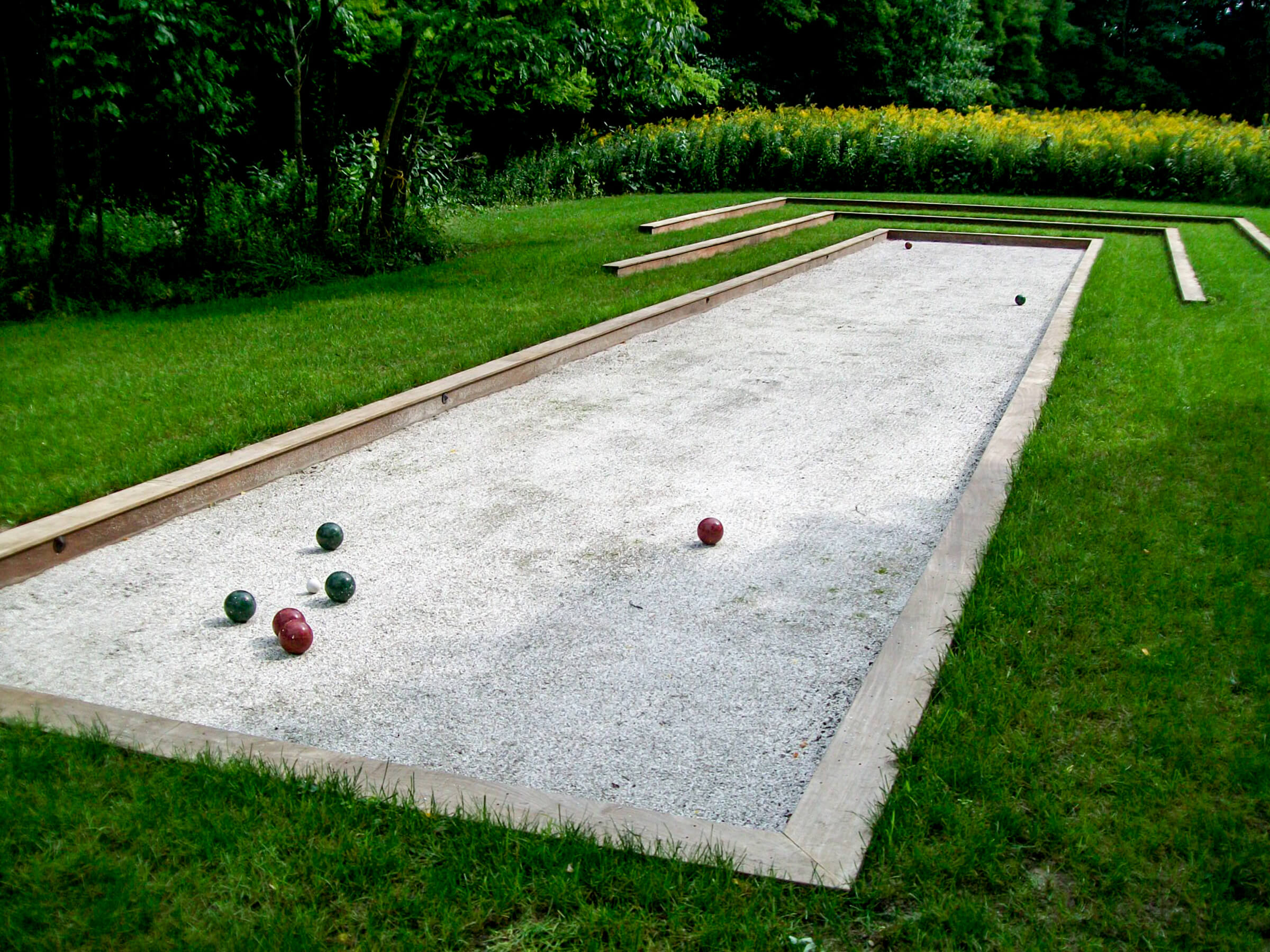 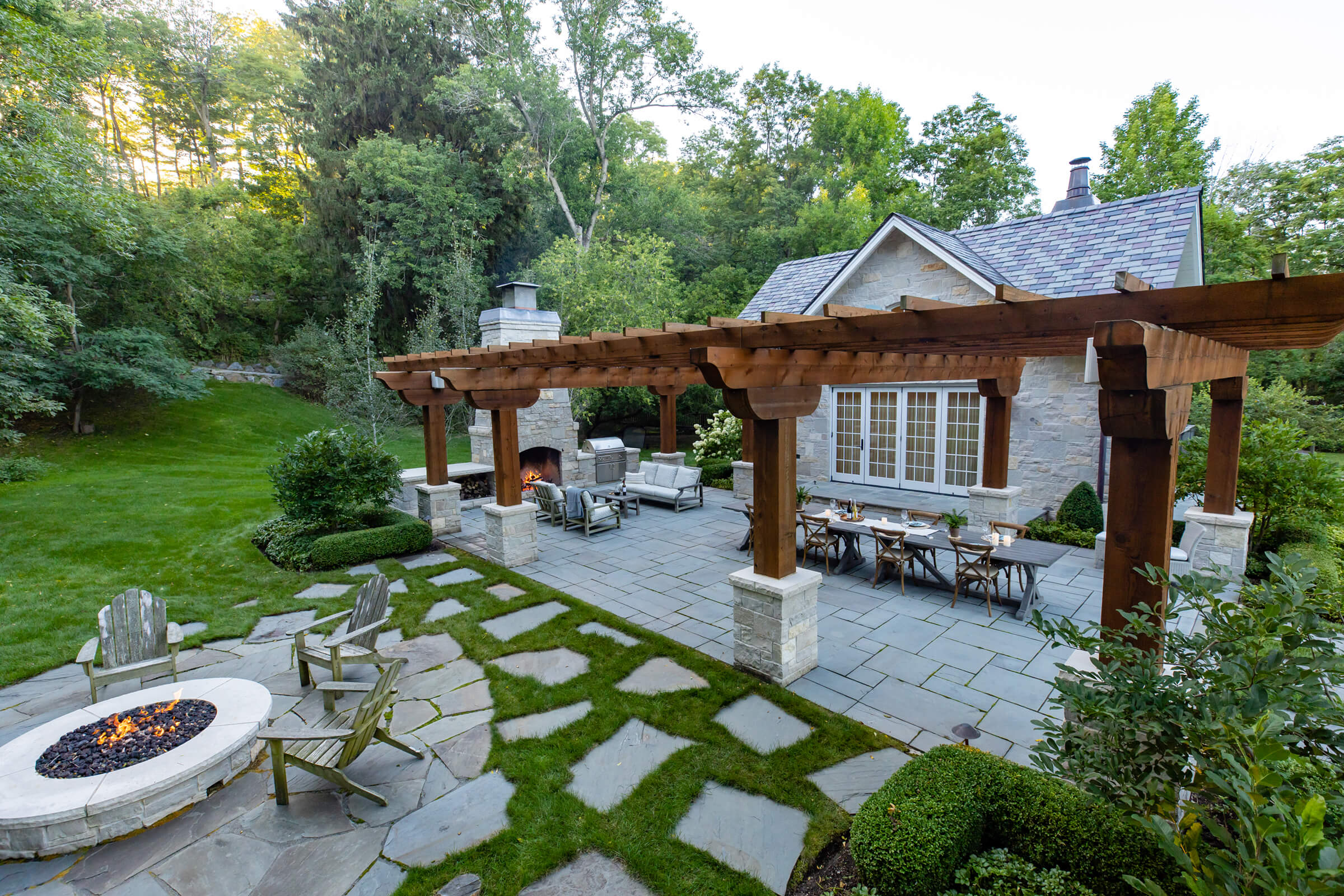 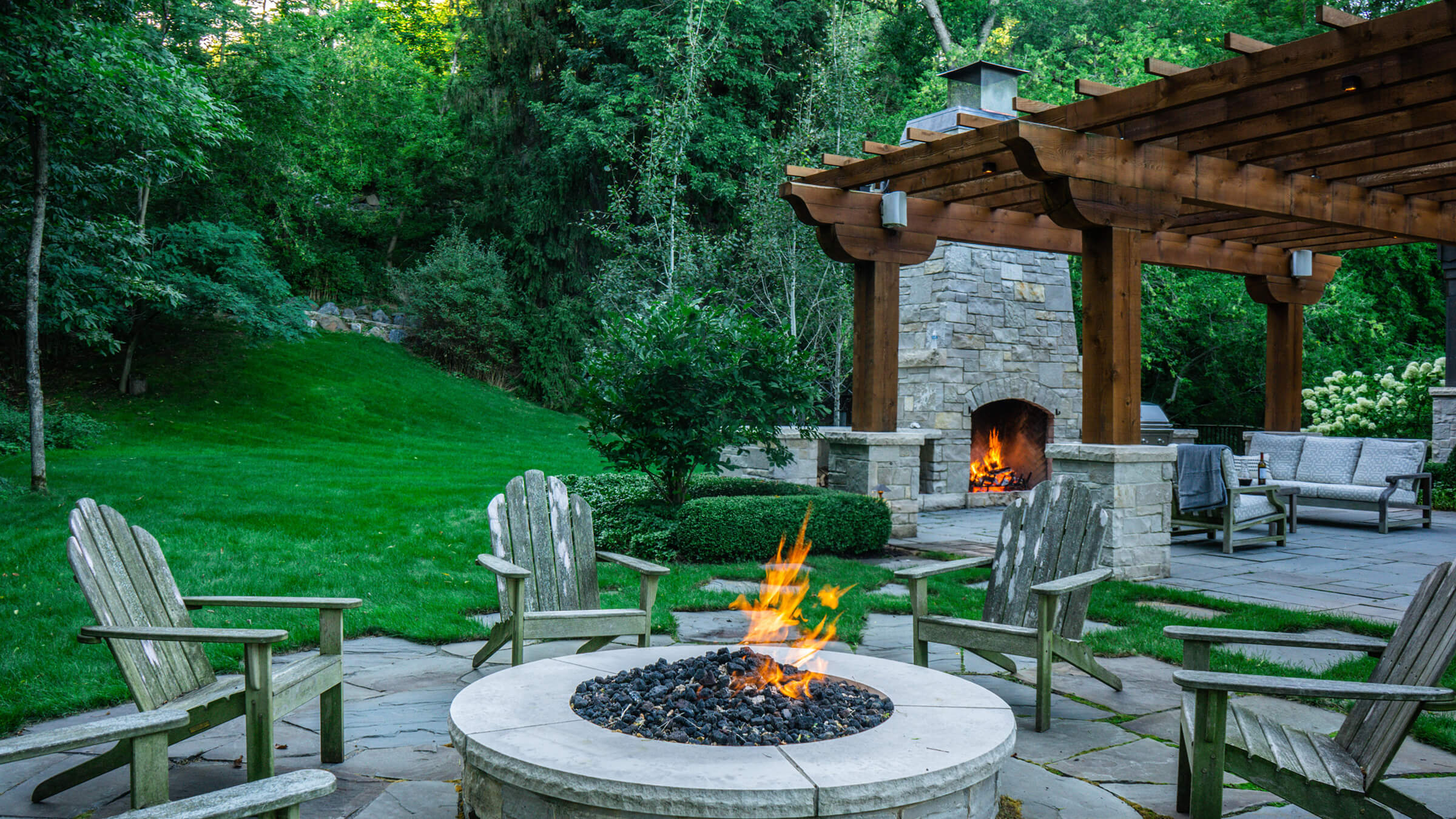 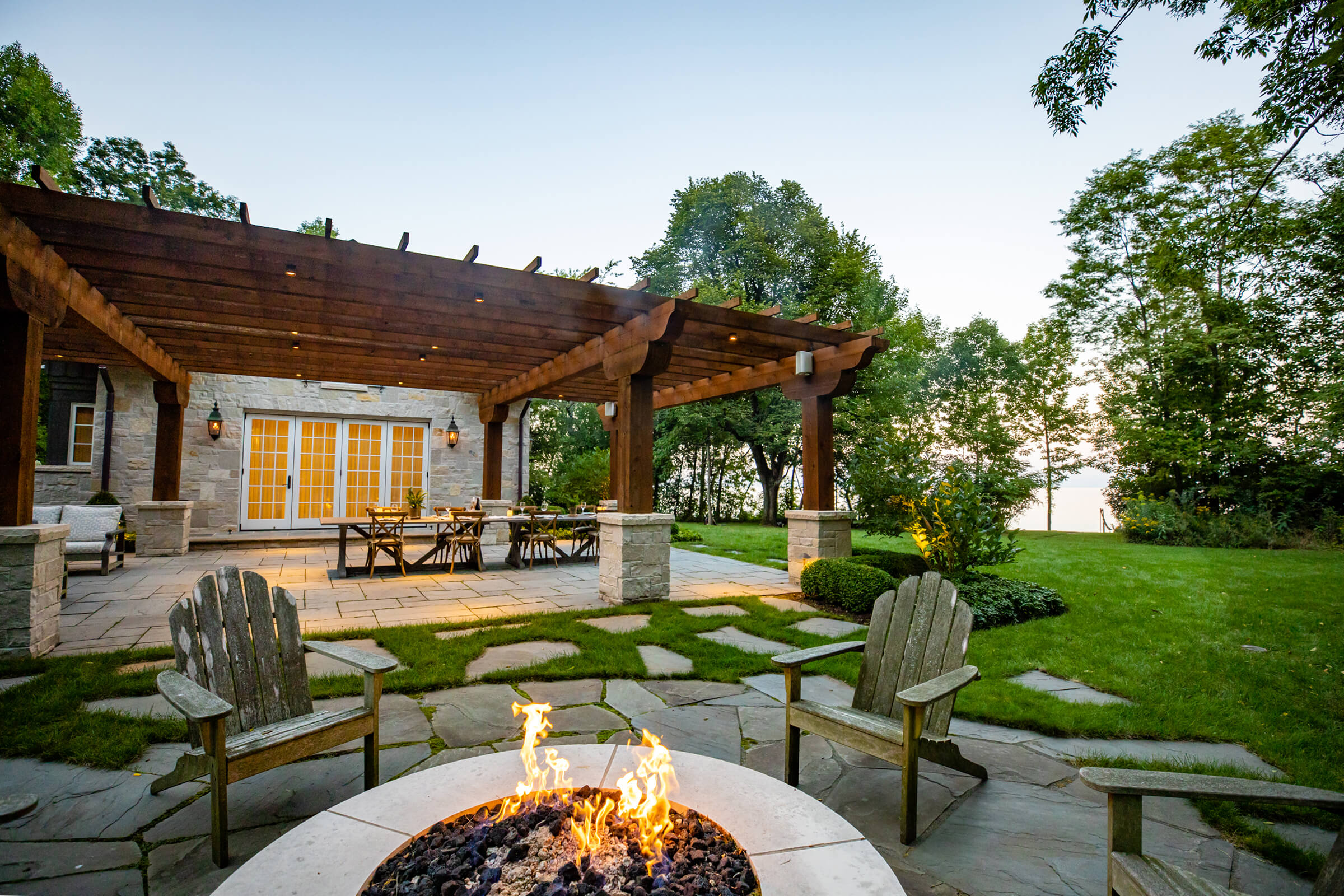 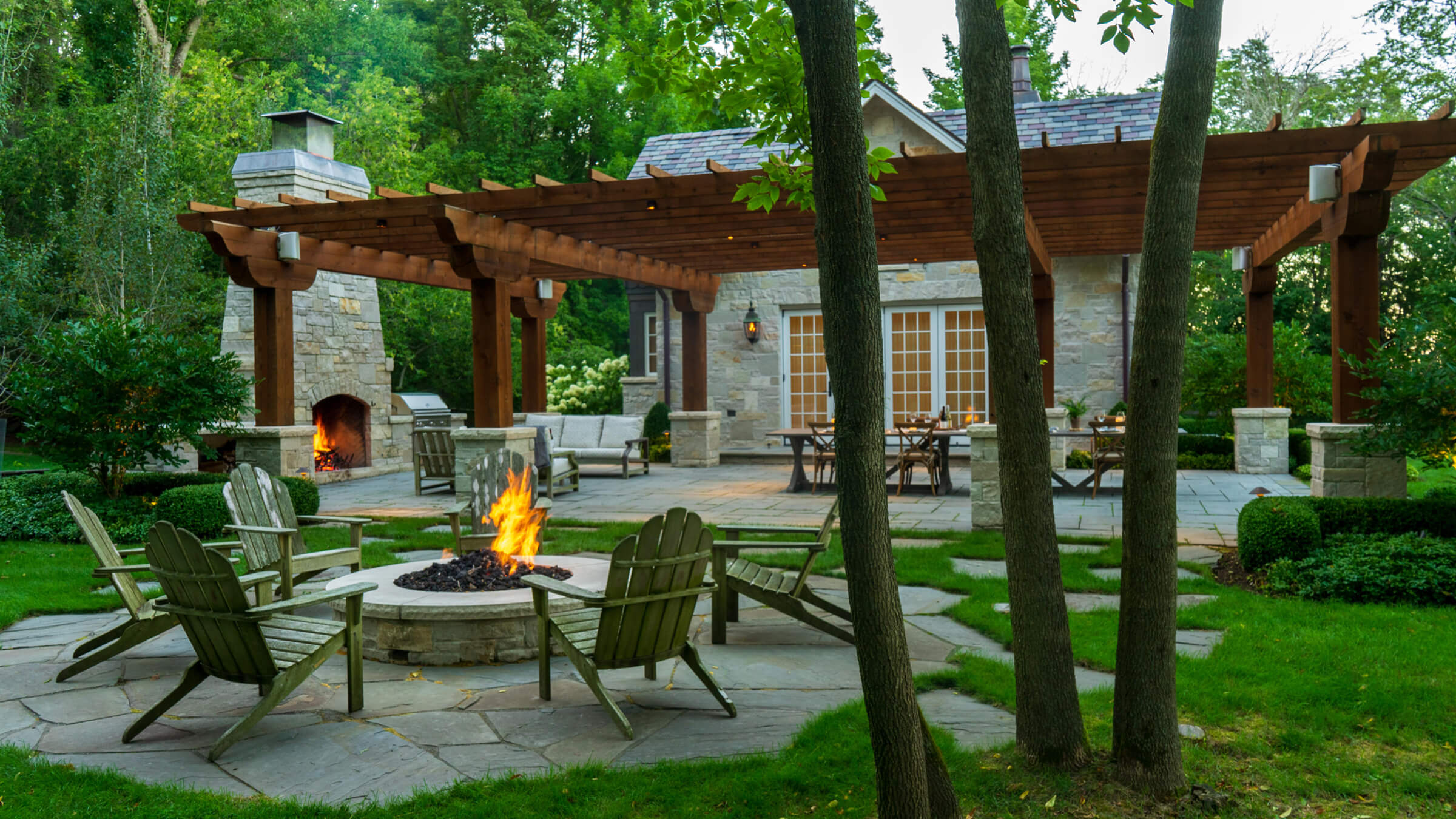